Eastern Market and the DIA

Ever since I moved to this part of the U.S. I’ve wanted to learn more about Detroit than simply that it was the home of Motown–a feat in itself. I knew that it had once been a hub of financial and cultural innovation, but, as I understood it, had undergone a significant decline with the decimation of the U.S. auto industry. Since moving here, I’ve learned of the work around regenerating the city through greening projects, urban gardening, and the introduction of new industries into the city. I have only recently learned of the 1967 riots in which several lives were lost and A LOT of property was destroyed. According to Blackpast.org “In the five days and nights of violence 33 blacks and 10 whites were killed, 1,189 were injured and over 7,200 people were arrested.  Approximately 2,500 stores were looted and the total property damage was estimated at about $32 million. The “riot” continues to be controversial. In fact, it is referred to alternately as “The 1967 Riot”, “The 12th Street Riot”, “the Detroit Race Riot”, and “The 1967 Rebellion” with each nomenclature having its own distinctive connotation. I am just beginning to learn about this significant, though seemingly neglected time in American history–but that’s a post for another day.

A couple of weeks ago I awoke to a gorgeous Saturday morning and decided on a jaunt to Detroit. I had a plan: I would first make my way to Eastern Market, a place I’ve been advised to check out since I arrived in Michigan.  Then I’d make my way down the road to the Detroit Institute of Arts which, because of my work, has been emailing me a listing of their weekly activities since I arrived at the university. Just a few days before my excursion to the big city I had learned that, to honor the anniversary of the Detroit Rebellion, the DIA was hosting a special exhibit to commemorate art by and about African Americans and the history of rebellion/revolution in the 1960s and 70s. So within about 3 hours of my decision I had arrived at the Eastern Market, finding myself in the midst of a heart of a cacophony of sounds and smells on the sidewalks that reminded me vaguely of West African and Caribbean popular markets that I have visited and relished over the years and strongly of Harlem, New York before former Mayor Rudy Guiliani got ahold of it in the 1990s. The sheds that held some of the vendors in their neatly allotted spaces with their expertly arranged tables reminded me of the “African” market way down 135th Street in Harlem after Guiliani got ahold of it.

My greatest find from the vendors was a gorgeous, gigantic bunch of collard greens for the incredible price of $1.50, which my partner and I sautéed up, made its way into a couple of my juices, and just plain ole delighted me for almost a week!  I also got some blue oyster mushrooms, which I think I cooked too long because they were quite dry (not cool), and some sun-dried roma tomatoes from Sicily, Italy. I snacked on a bunch of them before I made my way out of the market and have been adding them to all of my cooking (mostly the sautéed collards and the arugula that we’ve been harvesting from our garden almost everyday) for the past week–yum!!!!

I had some wonderful conversations with some of the vendors about their processes and sourcing. But while the selection was nice, I found myself missing the quiet of my local market; the one in downtown Ypsilanti, where I visit with the lovely farmers, ask them to hold things for me for the next market, touch, sniff, and savor the produce, buy my coffee beans and talk with the guy who roasted them just a couple of days before, and get a front row seat to pretty good local musicians whose parents also show up to cheer them on and work the crowd–good times!

At the Eastern Market I was treated to a lovely young lady, 15 years old, very talented, busking–playing violin–to raise money for her lessons and go to college in a few years. 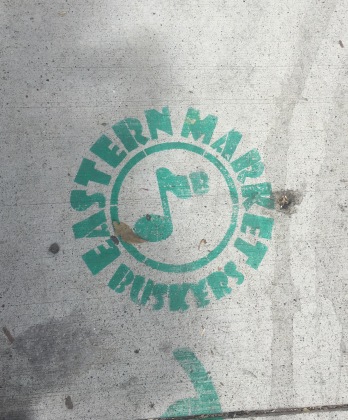 After a little over an hour I finally quit the activity of the market to go over the DIA for the exhibit–a major treat and highly recommended. When I arrived at the museum I found a temporary stage on which some of the students (a couple as young as 5) were breakdancing to the music provided by a talented dj nearby. 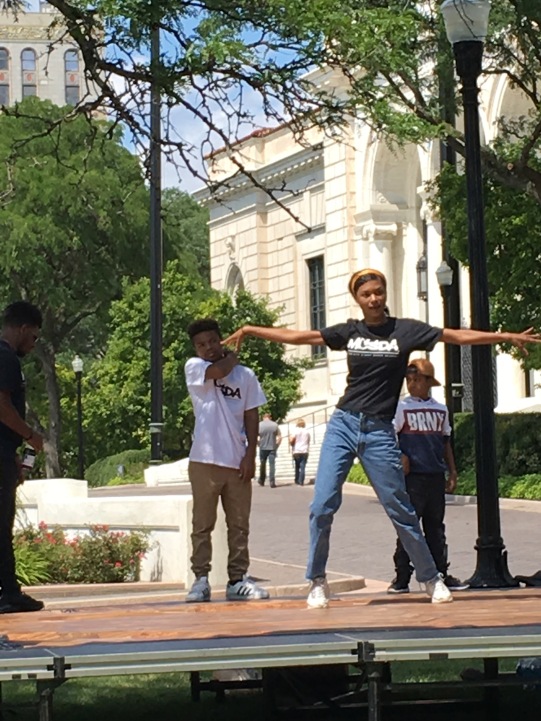 I got to make a bit of art–spray paint my very own lady Day of the Dead stencil on a record album. 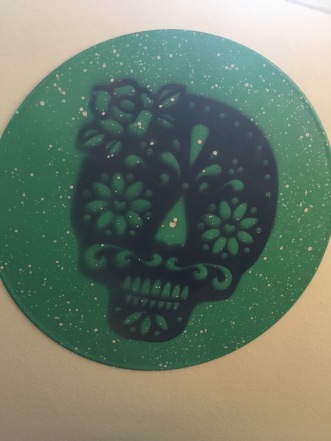 I almost reluctantly proceeded into the museum (remember, the weather was gorgeous) to the exhibit. Once inside and faced with the work I was inspired, but also saddened by what I saw, especially given the current socio-political context. There were a number of haunting pieces; one of which featured the faces, names, and birth/death dates of the three young men who were murdered by police in the Algiers Motel in 1967. Below their portraits are the names and birth/death dates of several African American men and women who have, in the past few years, been murdered by the police all over the country.

Below is a a small sampling of the very poignant pieces included in the exhibit: 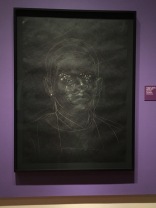 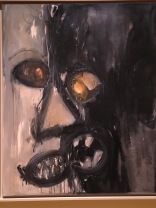 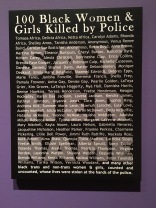 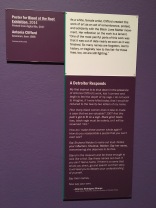 I encourage you to actually click on and read the commentary on the last art piece, “Say Her Name” by Antonia Clifford, a white artist, as it is perhaps, as important as the work itself. It also raises an issue that has been thrust back into the spotlight in the past few months with the release of Detroit, written by Mark Boal and directed by Kathryn Bigelow and the art piece by Dana Schultz, “Open Casket” with the brutal murder of the 14 year old Emmitt Till as its subject. For an informed and informative conversation about these two recently released art forms as well as the controversy around HBO’s proposed release of the series, Confederate, check out the podcast, “Still Processing” with Wesley Morris and Jenna Wortham.

I'm an artist, a mom, a teacher, a reader, a learner, a writer, an adventurer! This is where I get to share my love of African and African diasporic literature, visual art, and film as well as nature, spirituality, and travel. I also share my own art creations inspired by the "above mentioned" (check the gallery). Updates and news are always happening so please check back often! Peace!
View all posts by alligatorwoods →
This entry was posted in culture and tagged Art, Detroit Institute of Arts, education, film, The Art of Rebellions. Bookmark the permalink.