State College, New York and Beyond

Posted on June 28, 2010 by tonipressleysanon

So, things slowed down significantly once classes ended. I’ve spent the past few weeks having 2 hours lunches with friends and colleagues. Here’s a picture of my favorite resto in town: 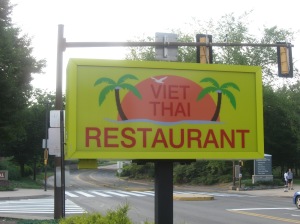 There’s never a wrong time to eat Vietnamese noodle soup, I say. I had dinner there the other night with my dear sister-friend, Solsi. She’s a history professor specializing in Latin American history—brilliant woman and more importantly, an alumna of The University of Wisconsin-Madison. Madison rocks!

I’ve also been reading like crazy and writing feverishly in order to get a handle on my book project. Once I start teaching time will be seriously compromised for such endeavors. I’m still at the overwhelmed-at-all there-is-to-know-stage of my research but am absolutely loving the topic: quilting as literary and visual art form. There’s more to it than that, but that’s the gist of it. I think I’ve been walking a little taller since I started this project. I am just in awe of the creative genius of African and African diasporic peoples.

I’ve also been interviewing movers and packing and vacating my house at strategic moments so that my landlady can find someone to take my place. That has actually turned out to be great for productivity. I usually mosey over to the smaller, quieter Webster’s Café, gulp down Three Eyed Buddha and type like a madwoman.

Yesterday, I read Alice Walker’s “Looking for Zora” in In Search of Our Mother’s Gardens. It was so beautiful I almost cried. I’ve had the book for years—no self-respecting black girl child of the sixties (no matter how late) does not own that book. But these past weeks I’ve been rereading those essays. They are so cogent it’s scary.

Last Saturday when my landlady was showing the house I went hiking on Mt. Nittany with my brand new friend, Lucky. I love to walk, but have a bad sense of direction. Lucky, with his carefully printed out map of the woods and, I hate to say it, maleness, cut down on the danger factor. I could tell you of my adventures in getting lost in the woods, but will spare you. Anyway, I love being in the woods and after three hours of wandering around, I  emerged feeling refreshed and, yep, I’ll just say it, healed. Under Lucky’s direction (he kept telling me to move my big head out of the way) I took a few artistic pictures. Here are a couple:

Last Sunday, my son went to Nebraska to participate in a nationwide thespian competition. He and all the other budding young actors left at the nutty hour of 2 am. As I stood there amongst a throng of other bleary-eyed parents waiting for my nwo young man to look down one last time to wave goodbye I was reminded of the morning I dropped him off at his first day of school. I remember in hindsight expecting a bit of clinginess. Instead what I got was a big kiss, a “Bye mommy!” and a wave of the hand as he disappeared into his classroom. He was swooped up by one of his new teachers and never looked back. I went around for weeks bragging about how independent my little boy was.

When he went to France with his schoolmates this past winter, I then got a cursory hug, kiss only on the cheek and a deep-voiced, “Bye mom”. Then he went to join the circle of fellow travelers and never looked back. The whole time he was away I think I heard from him three times. I went around for weeks bragging about how independent my son was.

There have actually been countless moments like that, but those two stick out for me. This time was no different. I am so proud of what a responsible, talented and independent young man my son has become.

That same morning (at the much more decent hour of 8 am) I headed to New York on the Chinatown bus. Though I swore off of it last winter when one of the drivers—a chain-smoking, cell-phone addicted, rude little man—had me praying all the way home—it was the only bus that would get me into New York in time to see the  New York premier of Moloch Tropical, Raoul Peck’s latest film. The driver was a sweetie pie though he was doing a least 80 mph on several occasions in one of those little commuter buses.

At one point we stopped at a rest stop and I took the opportunity to use the ladies’ room. When I ducked down to peek under one of the stalls (checking to see if it was occupied) I was horrified to see a small leather purse on the floor with the confederate flag actually stitched out of the leather and dyed the freaking colors! My gratitude at being on my way out of here grew ten-fold in that instant. I wish I’d taken a picture of it—but then again, I might not be here writing this if I had…

In true genius form, Raoul Peck introduced the film and then stayed around for some q&a. the film was spectacular—really rich and multi-layered. To use a term that Peck kept throwing out, it was “complex”. The film is a very thinly veiled indictment of Jean-Bertrand Aristide, So-An and Charlemagne. After dancing around the issue for the first part of the q&a with some journalist I should probably know–to the point where I wondered if I had watched the same film he was talking about, the floor was opened up to the audience. That’s when things got going.

Apparently, Peck was scheduled to premier the film in Haiti on January 15th or so, but the earthquake happened. I wonder what would happen if he showed it there now with people calling for the ousting of Préval and increasing the call for Aristide’s return. Might not be good.

In any case, I hope the film doesn’t go the way of l’Homme Sur le Quai (The Man by the Shore), one of my favorite films of all time but inaccessible because of the lack of distribution.  In any case, here’s me before the film with my buddy, Bethy in the background and then afterward with Raoul Peck. Do I look crazy or what?? I’m such a groupie 🙂 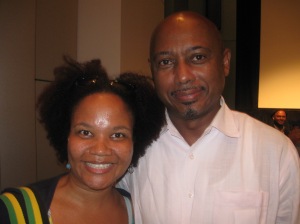 I ended up in Buffalo hunting for a house for my darling and me. After a harrowing couple of days with one of the loveliest women I have ever met, Glendora Johnson-Cooper, a librarian at UB, I found an adorable house in a great neighborhood with a great high school. Woohoo!

This entry was posted in Uncategorized. Bookmark the permalink.