My First Day Back

Posted on April 18, 2010 by tonipressleysanon

I fell asleep during the last 25 minutes of the flight.

There was a group of what looked to be Indian businessmen, the usual “gwo vant” in first class, a smattering of whites, lots of elderly, the diaspora and then the rest of us who don’t fit into any discrete category.

There was also a group of Korean women. One of them was my seatmate. She spent most of the flight studying a manual of some kind, complete with demographics, information about MINUSTAH, the political figures, etc. as it was all written in Korean she decided to practice her French by reading the whole thing aloud. A bit annoying. When the safety instructions began in Kreyol, she asked me what language it was in.

We got in an hour earlier than my itinerary said. The airport was back to the hot chaotic mess that it was in the 90’s.

While I waited for Serge to arrive I stood outside and watched as taxi drivers grabbed at passengers’ bags. Periodically, someone who looked mildly official would shoo them back to the other side of the gate. Sometimes they left, only to return a few seconds later; sometimes they didn’t leave at all. All of them had a good reason to be there.

I don’t know how long it was before Serge arrived with a guy to help carry my bags. It was only when we got into the van that I felt like I had really touched down. As we drove away one of the men on the street yelled into the window, “it’s you who will save us”. What a huge charge.

As soon as I arrived at the Oloffson, I dropped my bags and changed my clothes. At the reception desk I met a man who had been in Ayiti for a week. He was leaving just as I was arriving. Turns out we’re both from Queens Village in New York. I’m sure I lived there at some point during my childhood.  His parting words to me were, “Experience it”.

Serge and I then headed down to Grand Rue. I was fine until approached the street and I saw the devastation that the earthquake had wreaked. There were several instances in which people just seemed to have installed themselves on top of the rubble, sitting on a chair and staring into space. Whether they were just taking a break from something else I can’t say. I couldn’t get the image of Louko wrapped up in a sheet out of my head. That was hard.

I was happy to see Eugene and Cheby and all the children, talented young artists whom I have met during the conference. I was happy to see Legba still guarding the entrance of the lakou. I took them copies of the short film that I had made. Eugene, in typical cool Eugene fashion, brought out his laptop. He all crowded into one of his outer rooms and watched the film. I think they really liked it. While I’m here I’ll be gathering footage to make a longer version of it.

We took our leave shortly thereafter promising to return the next day. We headed down to Champ de Mars, where one of the larger tent cities is located. It was pretty mindblowing. All I could say to Serge was that living that that must be incredibly exhausting.

We made out way to the top of the tower that Aristide had had built. What we do for our art. I got some really good footage from up there. We’ll see.

I bought 6 BEAUTIFUL mangoes. Should be ok for a couple of days!

We walked a bit more then took a taxi to Arc en Ciel, one of our favorite haunts when I was here in December. The place was closing, but he guy who runs it remembered us and found some dinner and a couple of beers for us. He then left us to our devices simply asking us to leave the bottles and close the gate behind us.

I kept watching a man on the other side of the gate. He had a pint bottle of liquor which he drank until it was empty. He then propped himself up against wall and fell fast asleep. I wondered what his story was—how many people he had lost in the quake.

Serge told the story of his encounter with the quake. He was in Saut d’Eau when it happened. He said it happened in three parts.

He also told me that a lot of Port-Au-Prince was built on water and that the water was displaced to make room for the city. Whether it’s true or not I don’t know. His story reminded me of Toni Morrison’s story of the Nile flooding each year as an example of a site of memory. Apparently after the quake when the ocean receded there was a bunch of fish left stranded on the beach. Anyone who was close by went running for the fish. Unfortunately, when the ocean tide came back in all those who had run in to meet it got its force full-on. Lots of them died for that fish.

Serge called our friend, Francky. Francky told us about a program going on at the Ecole Nationale des Arts, so off we headed. What we found was a wonderful celebration of life. There were paintings everywhere, music. Dancing, all in the open air. The music was amazing! The sense of purpose and solidarity was incredible! 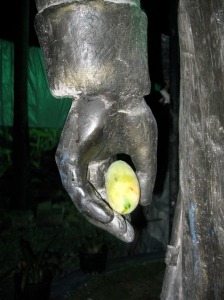 A Mango for Dessalines

I was so happy to see my dear friend again.

After it all we went out with some of the musicians to dance konpa and celebrate the success of the gathering.

Incredibly, Even though there was no Karnaval or rara this year, a rara song came out shortly after the quake: “Anba Dekomn” which means, “Under the Rubble”.

This entry was posted in 1 and tagged anba dekomn. Bookmark the permalink.